I've been slacking a bit with the posts, but I was very busy eating all of these yummy king cakes and catching beaucoup swag. Until next year…...

With the crazyness of Mardi Gras over, I was ready to go back to regular life, but not before we entertained our lovely friends from Virginia for a week.  We took them to some our favorite spots! I have reviews for them below and also for a couple of new places that I visited a few weeks ago! 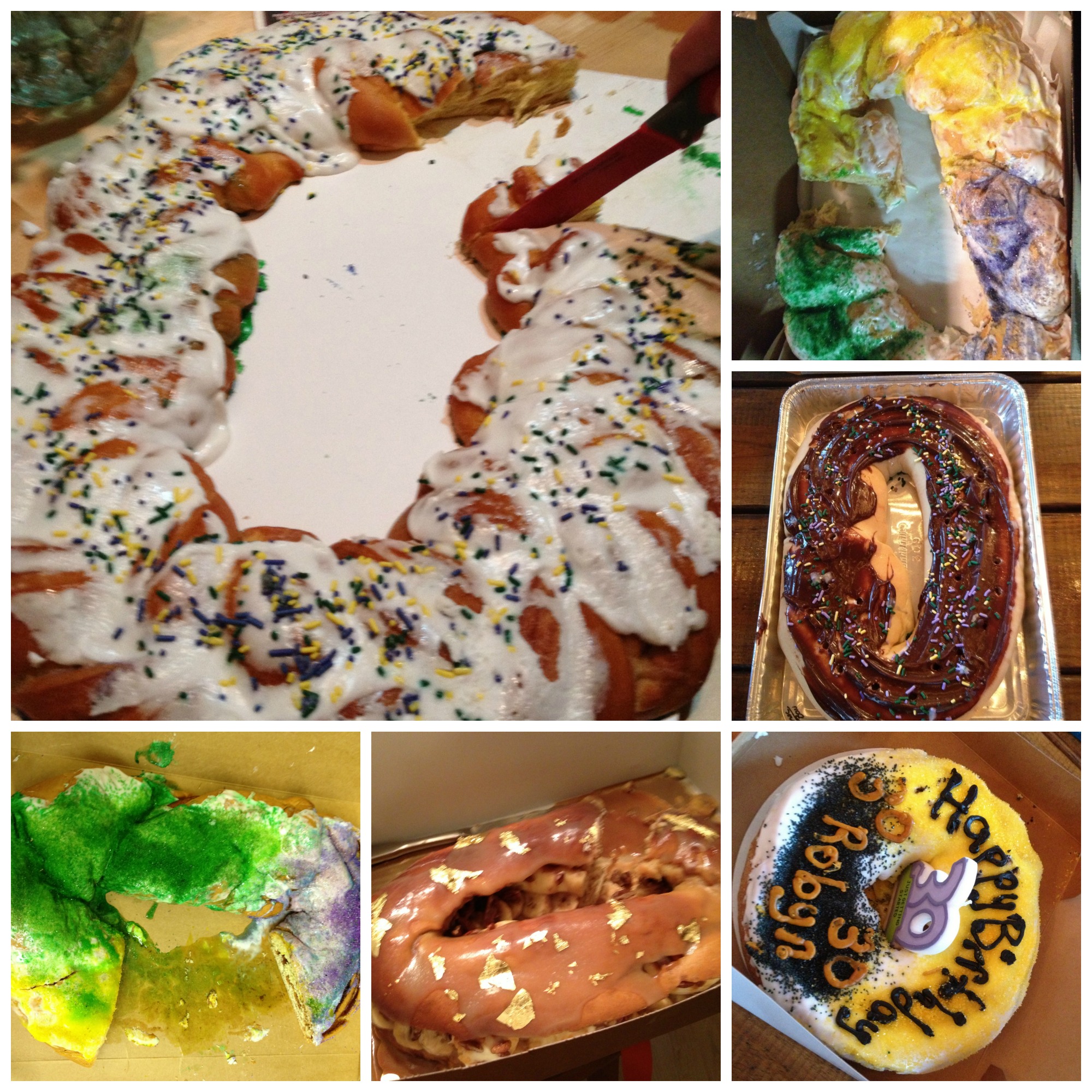 I have posted about Sylvain before, and I am happy to do it again! We went out with our friends who were in town. We were late for our reservation and thankfully they were very accommodating. My favorite drink (Blood in the Gulf Stream) was no longer on the menu, but they were nice enough to make it for me anyway, twice! We ordered the fried eggplant appetizer which was amazing, and also the bruschetta with butternut squash and goat cheese. We asked about the fish of the day and it was being served with quinoa and beet vinaigrette. I was trying to decide between that and the chicken- fried steak with carrot pureé and sautéed kale. I solicited the advice of our server on which entrée I should order and she very confidently recommended the steak. I was secretly hoping she would say that!  So that is what I ate, and I wanted to love it.  Don’t get me wrong, it was good, and I did eat most of it.  The flavor was nice, and the breading was crispy and crunchy, but the steak was very chewy.  The portion size was huge and covered almost the entire plate. It’s also a pet peeve of mine when the amount of protein doesn’t match up well with the amount of sides and vegetables.  It’s just wasn’t everything I was hoping it would be. I should have ordered the shrimp with popcorn rice and butter sauce which was so good! We enjoyed our evening and I would most certainly go back. Also we had a celebrity sighting which is 2 for 2 now at Sylvain. Shout out to Sam Shepard! 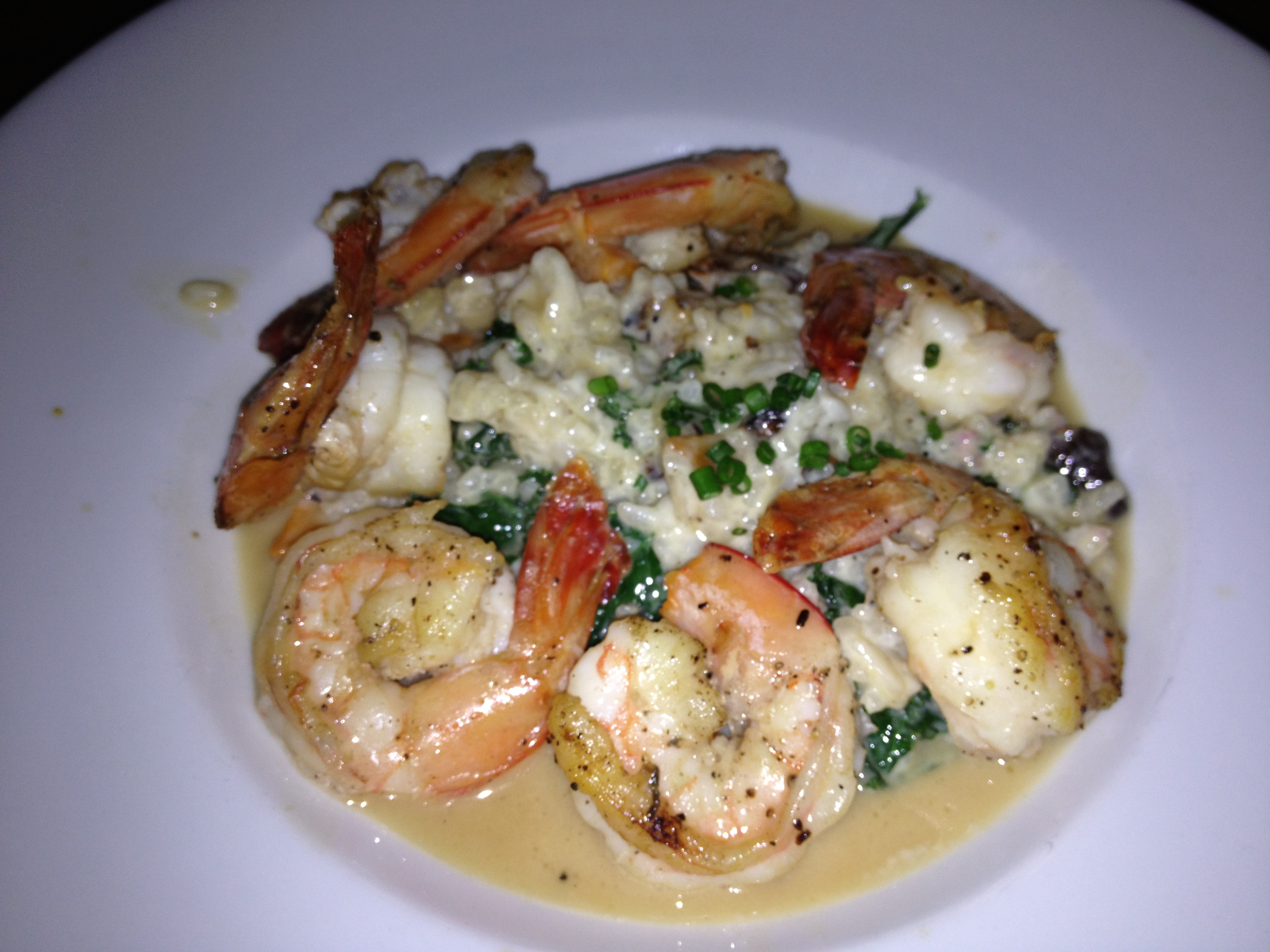 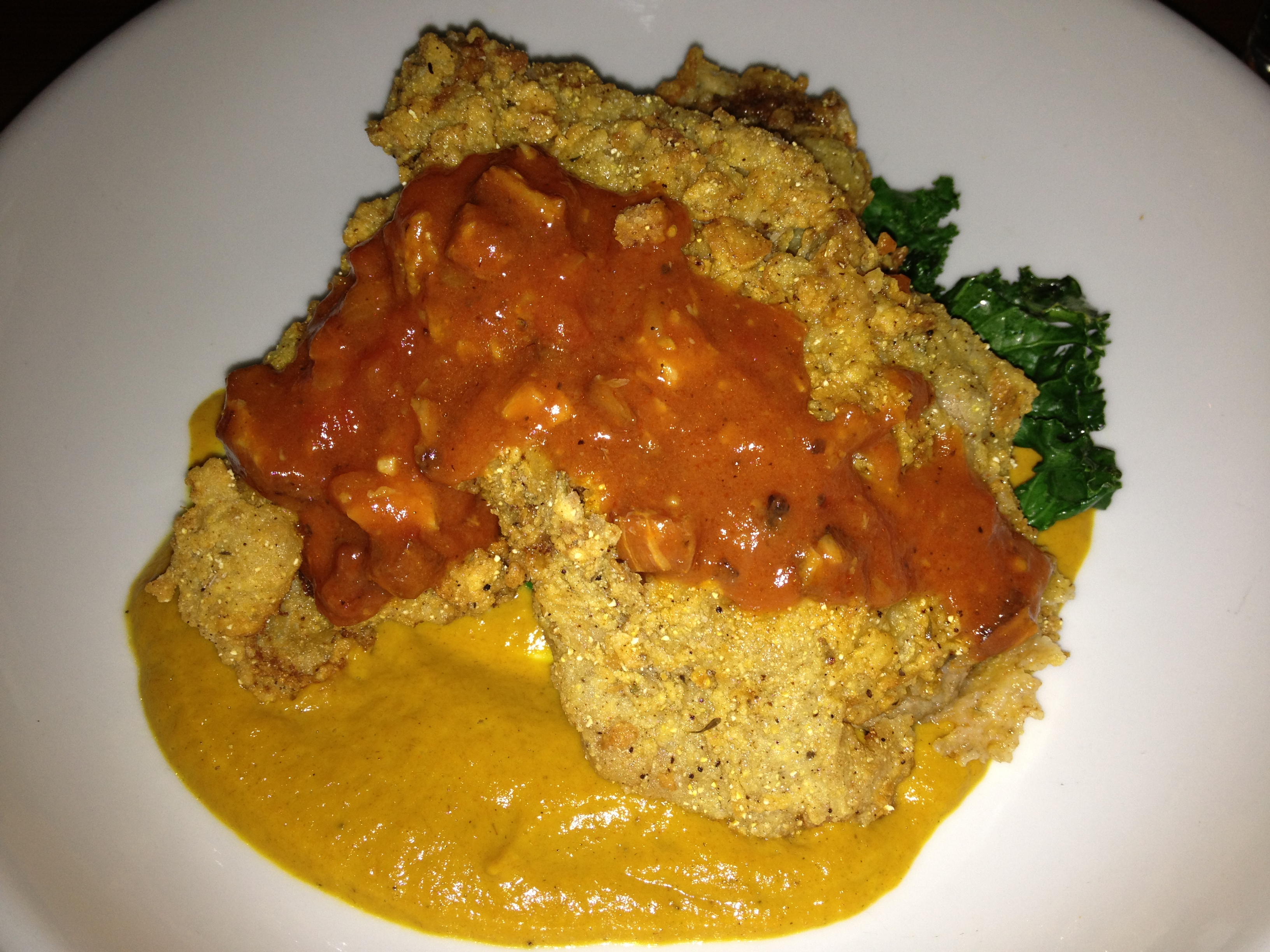 I have wanted to go to Parkway since the beginning of time.  Or at least since moving to New Orleans and hearing from numerous people that this is THE place to go for a Po’boy. Now for everyone who is not from New Orleans, a Po’ boy is basically a sandwich/sub served on a crusty French loaf. It usually has fried seafood of some sort. The name originated when the streetcar workers went on strike in 1929.  A pair of brothers, who were former streetcar conductors,  gave the men free sandwiches from their own restaurant. They called the unemployed workers poor boys and thus, the name. Being that this was my first time, I didn’t know what to order.  So I did what anyone would do in my situation; I got the exact same thing as the person in front of me. They sounded like they knew what they were doing! I got the surf and turf, which is fried shrimp AND roast beef and gravy, dressed of course and with pepper jack cheese. It was so tasty and gooey and crunchy and all I could have wanted for my first Parkway experience. It was the best choice and I will probably never order anything else. The picture does not do it justice! I took a cue from the locals and completed my meal with Zaps chips and root beer. 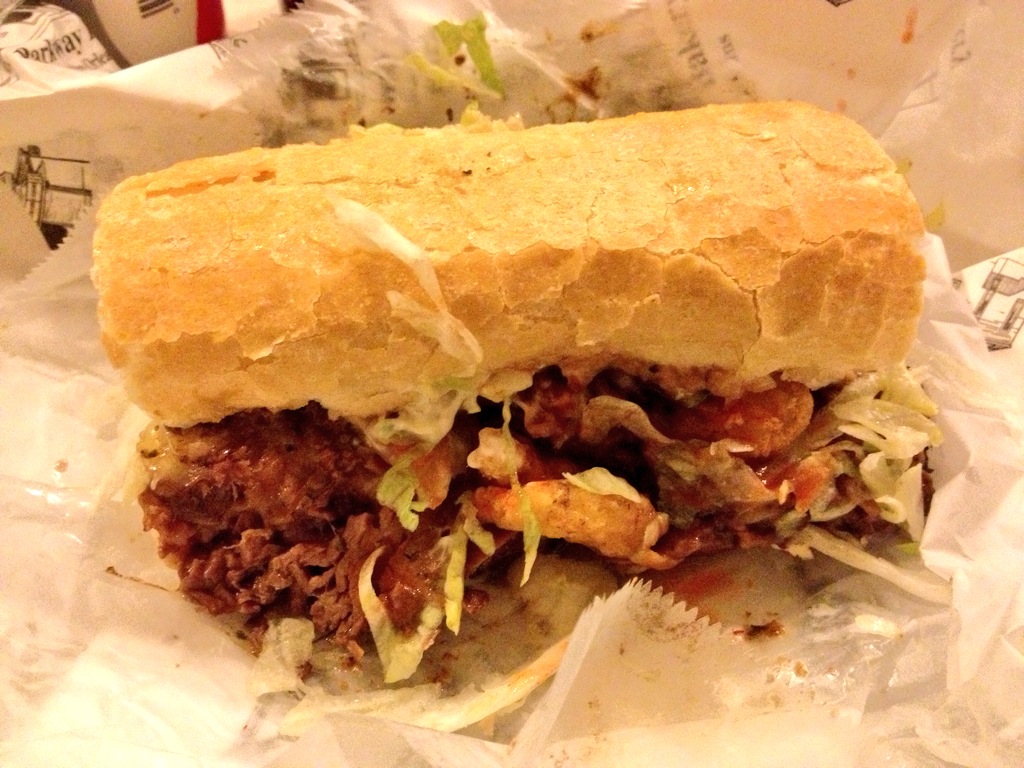 While our friends were still in town, we got the brilliant idea to go to Pat O’Brien’s in the middle of the day.  Then we let them order multiple hurricanes and brought them to a restaurant where we had to wait for over an hour. Sorry guys, promise I will never go to Mona Lisa’s again. #truth  This was the second visit to the Italian restaurant on Royal street. The first time was last year with my dad, and we had to wait over an hour for seats. Dinner was good and atmosphere was cozy.  This time we had to wait for 25 minutes and the moment we were seated our server let us know that 2 large tables had been seated before us and if were going to order anything other than pizza, we would be waiting a while. At the time I appreciated his honesty, but I didn’t foresee us sitting around for an hour plus, just to be rewarded with lukewarm, mediocre pasta dishes. I don’t think any convincing will ever tempt me back. Still on the hunt for good Italian in Nola 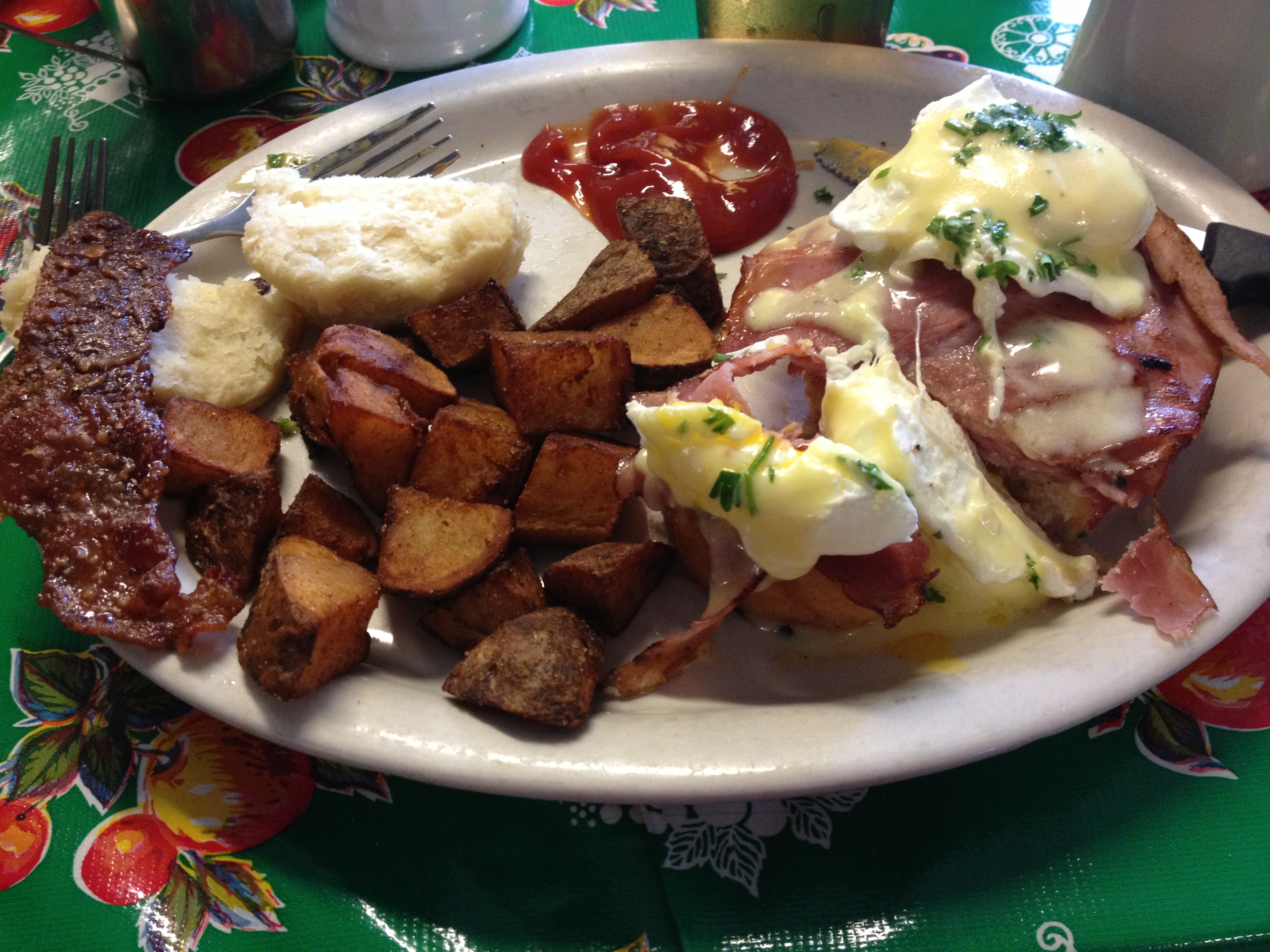 Courtney and her friend Paris and I went to Elizabeth’s for brunch in the bywater.  I am proud of us for venturing out and for Courtney pushing us to go to different places! As much as I love trying new things, I tend to stick with what I know. We went on New Year’s Eve, and of course it was packed. Apparently everyone else wanted praline bacon too. So we waited patiently for our turn and were thrilled to learn that they hadn’t run out of anything yet.  I ordered the eggs Elizabeth that consisted of poached eggs on French bread with ham, and I enjoyed it very much. We of course had to sample their famous praline bacon as well. Surprisingly I think I actually prefer regular bacon. I definitely get the whole sweet with savory notion, but it was a bit much for me. Also I like to eat bacon with ketchup…..so there’s that. We devoured all of our food and I would certainly go again if I was in the area.

This is another place that I had been hearing about for quite some time and it also happens to be located in the bywater. Courtney and I were planning to see a movie, but it was sold out, so we decided to cheer ourselves up with some pizza!  We opted for slices and each tried something different, (sausage and puttanesca), a house salad, and some delicious, very strong garlic knots. I loved the impressively thin crust,  and can't wait to go back and try more. Next time I want to order a whole pie and try one of the awesome specials, or the Margherita. They also offer vegan pasta and pizza options and had a variety of cookies for dessert.  It's New York City meets Bywater hipster vegan, and it's totally delicious. 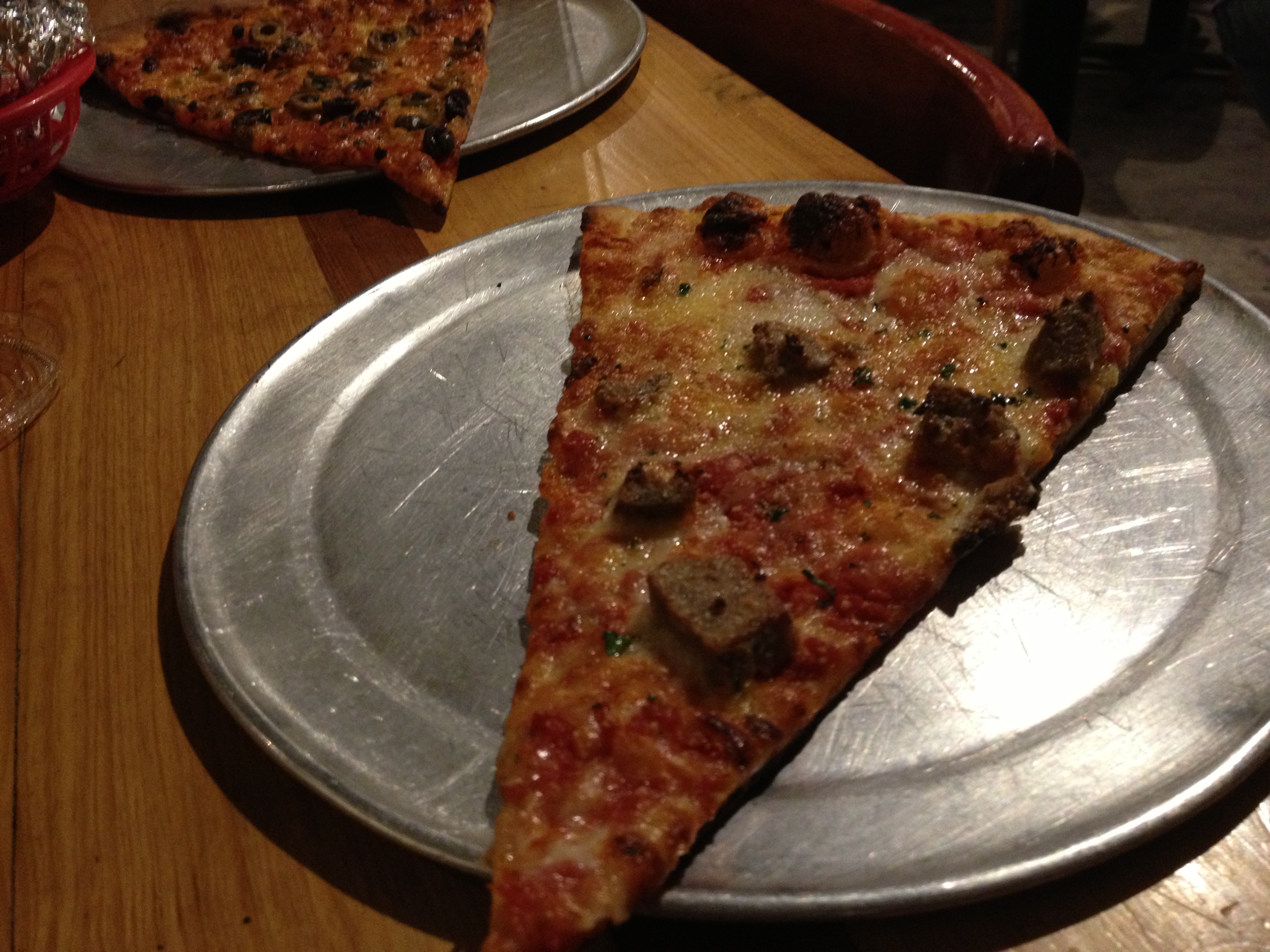 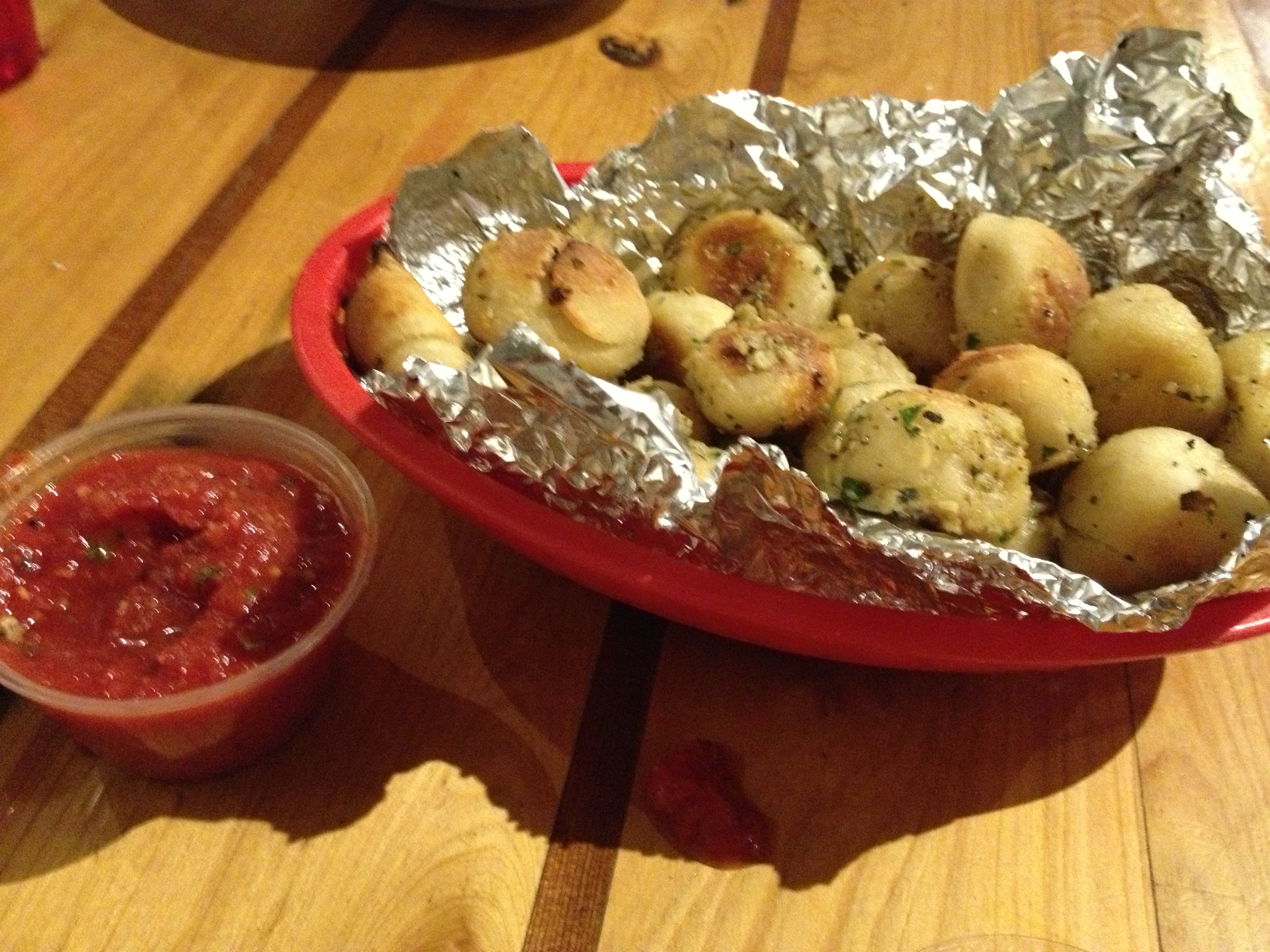