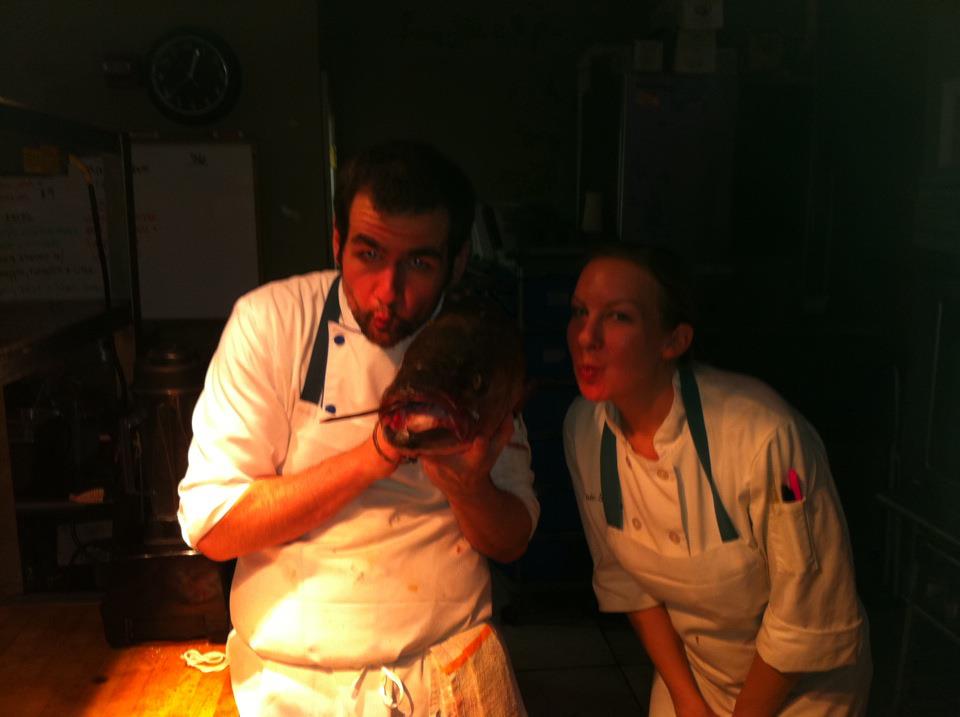 Last week my dad came to visit Courtney and I for a few days before Thanksgiving!  I am going to share a separate post later about that, but first I want to pay tribute to my friend Tom.

Tom and I worked together in the kitchen at Metro for almost 4 years.  We worked 6 days a week, 10-12 hours days most of the time.  I’m really bad at math, but we spent thousands of hours together.  There were certainly times when we were sick of each other and we fought and bickered like kids.  It was difficult at times for us to maintain a normal friendship with the stress of working so much and being together all the time.  Most of the time though, Tom was so great to me and treated me like a princess.  I would walk into Metro on a Sunday to work the brunch shift and all I had to do was mention that I was hungry and before I could blink, he would put a plate of amazing food in front of me.  We even came up with a “breakfast club” sandwich that was perfect for those mornings when I was feeling a bit……hungover.  He worked so hard and still had time to make food for the staff. We were spoiled rotten.  He made sure we were well stocked with coffee, vitamin waters, gatorade, whatever we wanted.  He was so caring and genuinely wanted to do for others.  Not to mention he was an AMAZING chef who was so passionate about cooking and about elevating the level of the food at Metro.  He was so creative, he could come up with the best vegetarian 4 course dinner you’ve ever had in about 10 minutes.

I eventually made the decision to move to New Orleans with my sister in August of 2012.  Tom was sad because he always had a crush on me……ok he was in love with me.  It was finally sinking in that I really did just want to be friends with him.   I did love Tom, but I was clear with him from the beginning that I just wanted to be his friend.  I was leaving Roanoke and I wouldn’t be there to laugh with him or vent about work.  It was hard to imagine moving on.

It took a little while for us to begin talking on a regular basis after I moved.  Tom thought I wasn’t interested in keeping in touch, but I really did want to know how he was doing and what was going on in his life.  I knew Tom was sick before I left and I worried that he wasn’t getting enough rest and wasn’t taking care of himself.  He was so dedicated that he put off treatment so that he could handle things at work.  He finally set a date and started his chemo and things seemed to be going well.  I would call him or text and he would tell me about the treatments.  He was feeling pretty good and he would even go to work to help out in between rounds to keep himself from getting bored.  He would go to UVA to get regular check ups and he ended up having to stay for longer periods each time.  He was getting fevers and they didn’t know why.  They eventually figured out he had a bad infection from the port in his chest that was delivering the chemo medication. His lymphoma was not responding to treatment either.  His situation was looking grim, but he didn’t let any of us know how bad it really was until the end.  I can imagine it would be hard to say, and I can’t blame him for not keeping us informed.  It was clear that he didn’t want any of us to worry about him.  I spoke with him a few times while he was in the hospital, and I’m very glad that I got to tell him that I cared about him and I was praying for him to get better.  Soon he stopped responding to texts and phone calls. I didn’t want to think the worst, but Tom always returned my calls and texts.  It was weeks before we finally got the awful news from a family friend that he was critical and there was nothing more the doctors could do.  He was sleeping a lot and was out of it most of the time.  He couldn’t take any calls and wasn’t allowed visitors.  I was shocked.  I didn’t even get to say goodbye. I didn’t get to tell him how much he meant to me, how much I loved him.  I wanted to say I was sorry that this was happening to him.  We all waited anxiously to hear any news about how he was doing.  We wanted to believe he would suddenly get better and then we could breathe easier.  It never happened though, and the day after Thanksgiving, on Black Friday , I got the call.  I was at work and I couldn’t answer right away, but I had a feeling it wasn’t good.  Tom had died earlier that morning, peacefully in his sleep.  This could not be happening.  I had just put a card in the mail to him that morning.  I was in a daze for the rest of the day, and it just didn’t seem real.  The next day we were notified about the funeral arrangements and I booked the trip that night to go home.  I had to be there and give him a proper goodbye.

The funeral was tough, a lot more emotional than I thought it would be.  I thought I was fine because I had a few days to process his death.  The ceremony was beautiful, but the open casket caught me off-guard.  Everyone was invited to come up and give final goodbyes.  I was shaking like a leaf as I watched row by row of people go up to the altar.  I wasn’t ready for my turn, but I knew I had to.  I tried my best to stay composed as I walked up to him.  I looked at his face for as long as I could, I touched his hand and said my farewell.  It was probably one of the hardest things I’ve ever done.  It was so sad to say goodbye. 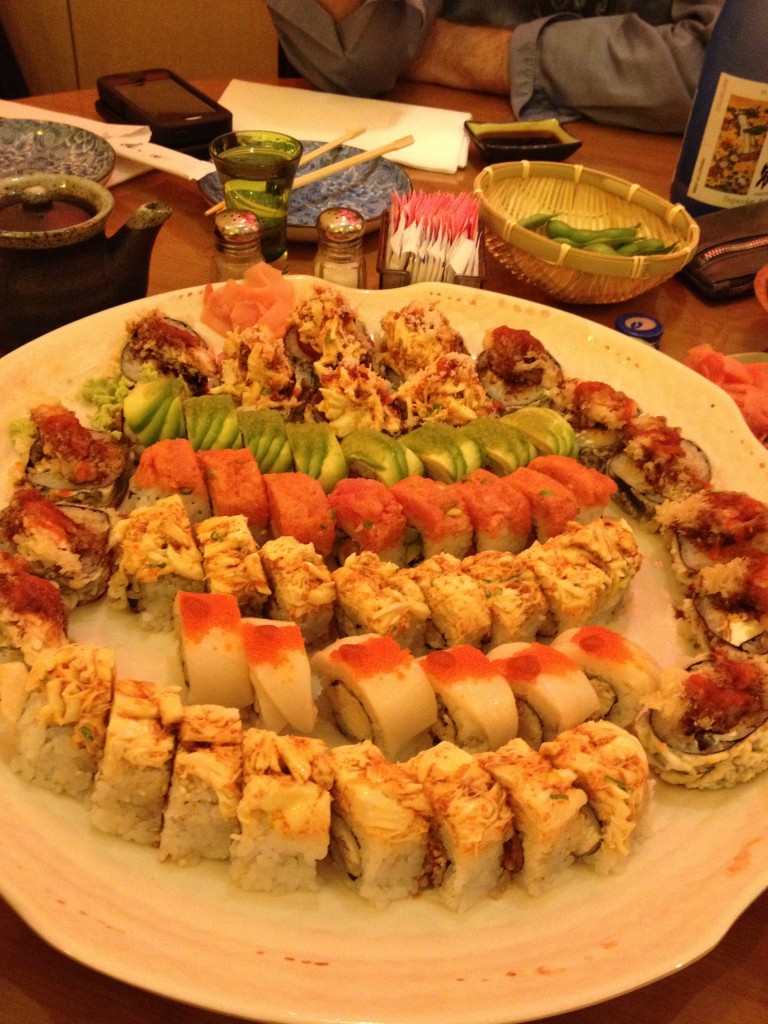 After the funeral we all went out and had a sushi feast at Tom’s favorite restaurant Ben Gui, complete with multiple bottles of sake. We made sure to order his favorite rolls.  It felt very good to celebrate him in that way, I knew he was there with us that night.  I was glad I made the trip, and grateful to be surrounded and supported by good friends.  I love you Tom and I will miss you and think of you often buddy. Thank you for everything, 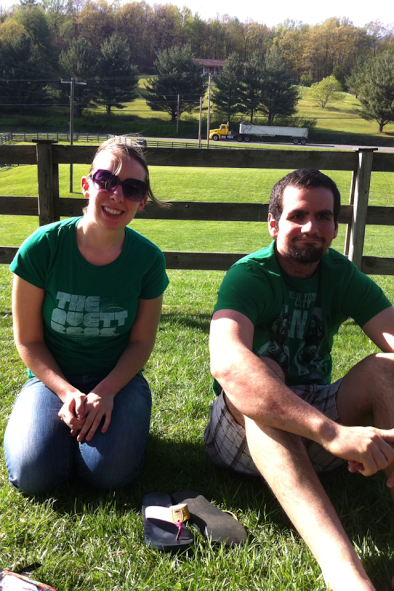